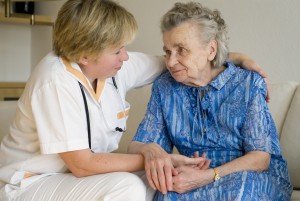 As you may already know, the number of older Americans (defined as age 65 and older) has been increasing at a heretofore unseen pace in recent years. In fact, experts tell us that the number of Americans is projected to more than double from 46 million today to over 98 million by 2060, and the 65-and-older age group’s share of the total population will rise to nearly 24 percent from 15 percent. For the first time in recorded history, the older population in the U.S. will outnumber its younger counterpart (those age 21 and younger). The increase in older Americans has already created a shortage of caregivers willing to care for them – and as the number of elderly continues to grow, that shortage will only become more problematic. What you may not know is that robot caregivers are being considered as a solution to the caregiver shortage. A recent survey looks at how Americans feel about robot caregivers for the elderly.

Would You Want a Robot Caregiver?

Americans are living longer; yet, the physical and mental deterioration that occurs as part of the natural aging process still begins at roughly the same age as it always has, meaning we need more caregiver for the elderly and we need them for a longer period of time. The Bureau of Labor Statistics estimates that more than 800,000 new home health and personal care aides will be needed between 2014 and 2024 alone. Providing care for the elderly, however, is not the most attractive job given the risk of injury and physical demands of the job and that low pay typically offered to elderly caregivers. One solution is to use robot caregivers. To find out how Americans feel about that idea, the Pew Research Center conducted a survey. Data was compiled based on participants being asked to envision the following scenario:

“Today, many older adults move into assisted living facilities when they can no longer live independently. In the future, people could be provided with a robot caregiver that would allow them to continue living in their own home as they age. This robot would be available 24 hours a day to help with household chores, test vital signs and dispense medication, or call for assistance in an emergency. It would also have conversational skills and could serve as a companion for people who live alone.”

After reading and contemplating that scenario, survey participants were asked a series of questions related to the idea of robot caregivers. The following data gives us a glimpse into how people in the U.S. feel about the idea:

Please join us for a FREE upcoming seminar. If you have questions or concerns regarding an elder law legal issue, contact the experienced elder law lawyers at Hedeker Law, Ltd. by calling (847) 913-5415 to schedule an appointment.