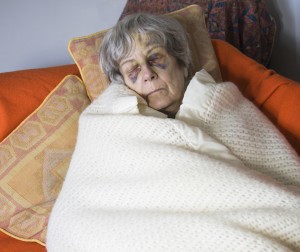 Sadly, elder abuse and neglect has become a major problem throughout the United States in recent years. It isn’t a new problem; however, as the number of older Americans grows at an astounding rate, stories of abuse and neglect of the elderly become more common as well. Take, for example, the recent death of a 66-year-old Illinois woman who authorities claim died at the hands of her daughter and son-in-law.

Paulette Boyce was found dead in the home she shared with her daughter, son-in-law, and grandsons in December of 2016. Authorities say the woman was found covered in bed sores, urine and feces, and weighed just 65 pounds when police were called to the home. The Kendall County Coroner’s Office later rules the death a homicide.  Consequently, the victim’s daughter and son-in-law were each charged with eight counts of abuse or neglect of an elderly person, including four class 2 felonies and four class 3 felonies, according to court records.

Records indicate that Boyce was released from a rehabilitation and health-care center in May 2016 and went to live with her daughter who had power of attorney over her. Since her release from the facility, she had been cared for by her daughter Jennifer Ashton, and her husband Craig Ashton, both 42.  The Ashton’s two teenage children, ages 16 and 19, also lived in the home; however, neither of the grandsons have been charged.

On December 2, 2016, police were called to the home on Dec. 2, 2016, when Craig Ashton dialed 911 to report that Boyce was not breathing.  When police arrived at the home, they determined Boyce was dead. According to the police report, the couple informed the police that Boyce had been checked on 30 minutes prior to being found unresponsive. The same report, however, indicates that Boyce was located on a half-deflated air mattress inside a bedroom in the home in the fetal position and that full rigor mortis had set in when first responders arrived.

In an affidavit submitted as part of a request for a search warrant after finding Boyce, it was noted that “Generally full rigor mortis sets in approximately six to 12 hours after death. This would contradict the claim that Boyce had been seen alive a half-hour before police were called.” The affidavit goes on to state that Boyce was “not being properly cared for and she had long needed substantial medical attention” when she was found.

Boyce’s daughter admitted to police that she refused to do CPR on Boyce and told authorities that she had not had anything to eat or drink in the past few days.   Despite this, the police report indicates that Jennifer was interviewed and claimed to have cared for her mother as best she could.  “Jennifer agreed with detectives that she was at the point where she was unable to take care of (the woman)” wrote the police.

Police also interviewed Boyce’s son-in-law who told deputies he was left with his mother-in-law several days a week while his wife worked, and that he would not change, clean or take her to the bathroom. Instead, he would only provide her with food and drinks.

The only real explanation provided by the Ashtons for why they had not sought assistance or moved their mother to a care facility was that they were waiting until after the Christmas holiday to discuss placing Boyce in assisted living again, according to the police report. Sadly, medical records reviewed by officers revealed that recommendations were provided to Jennifer Ashton about her mother’s continued care when the woman came to live inside the home. “The records indicate that Jennifer failed to bring Boyce to multiple scheduled appointments,” police wrote.

According to medical examiners, the immediate cause of Boyce’s death was listed as pneumonia, with malnutrition, dehydration and physical neglect listed as significant conditions contributing to the woman’s death.

Elder abuse and neglect is a very real problem that impacts all of us. If you suspect that an elder loved one is the victim of abuse or neglect there are steps you can take to help. The first step is to contact an experienced Illinois elder law lawyer at Hedeker Law, Ltd. by calling (847) 913-5415 to schedule an appointment.